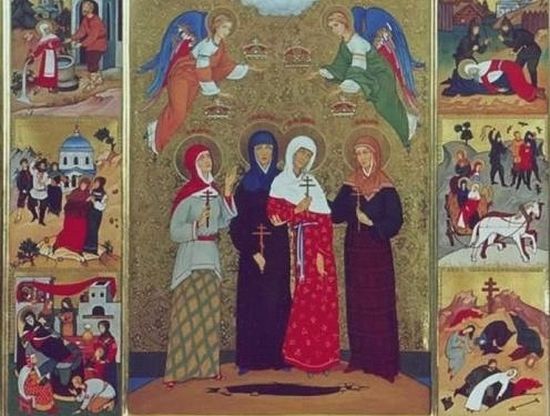 The Holy
Martyrs of Puzo

Eudocia (sometimes spelled Shikova) was born on February 11/24, 1856, in the Puzo village into a peasant family. Orphaned at an early age, the future saint was reared in the family of her uncle, a churchwarden. Dunya [a diminutive form of the name Eudocia] was very pious, visited many holy sites, including Sarov Monastery and Diveyevo Convent. From her youth Eudocia led a life of a “holy fool”; for example, she used to wear a warm shawl and a homespun coat all year round, enduring beating and jeers with great patience. At the age of twenty, Dunya was taken seriously ill and became bedridden for the rest of her life. Young maidens, “care-givers”, used to come to her and take care of her. Together with them the venerable woman founded something like a monastic community.

Eudocia had five close disciples. Three of them—Daria Timolina, Daria Siushinskaya and Maria—were martyred together with her, while two others gave an account of the life and martyrdom of these saints.

Blessed Eudocia led a strict ascetic life and taught her spiritual daughters to do the same. She took upon herself the spiritual podvig of “foolishness-for-Christ’s sake.” The Lord bestowed rich gifts upon Eudocia already in her lifetime, such as clairvoyance and healing. The saint liked to sing Church hymns together with her spiritual daughters and other visitors and prayed very much. The village residents who knew Eudocia venerated her as an eldress.

Martyr Daria Timolina came to Blessed Eudocia despite her parents’ opposition. Neither beating, nor threats, nor promising her in marriage to someone by her relatives against her will could compel the maiden to abandon her spiritual labors at Dunya’s. Over a period of twenty years Daria never left Dunya’s cell—she even did not go out to see her relatives and did not attend church (they were given Communion at home). Daria was a great faster and accepted everything from Dunya with joy, even when the latter scolded her. Daria’s spirit burned with the aspiration towards God. At the time of her martyrdom she was forty years old.

Holy Martyr Daria Siushinskaya practiced unceasing Jesus Prayer. When she still lived in the world, Daria would read through the Psalter while standing, without a break, every day. She was very meek. She lived at Dunya’s for three years. By the time of her martyrdom she reached the age of forty as well.

St. Maria was married early in life. But after a miraculous vision of St. Nicholas the Wonderworker who healed her from a malady Maria began wandering. It was at command of St. Nicholas that she came to Dunya. Maria served Dunya for seven years and was as obedient as an infant. Maria had left her beloved husband for God’s sake, and she revealed her name and surname to nobody lest her husband and other relatives should find her. During the last year she had a sharp pain in her leg and could hardly walk. Knowing that they would be killed, St. Maria (together with others) of her own free will came to share their mentor’s fate. 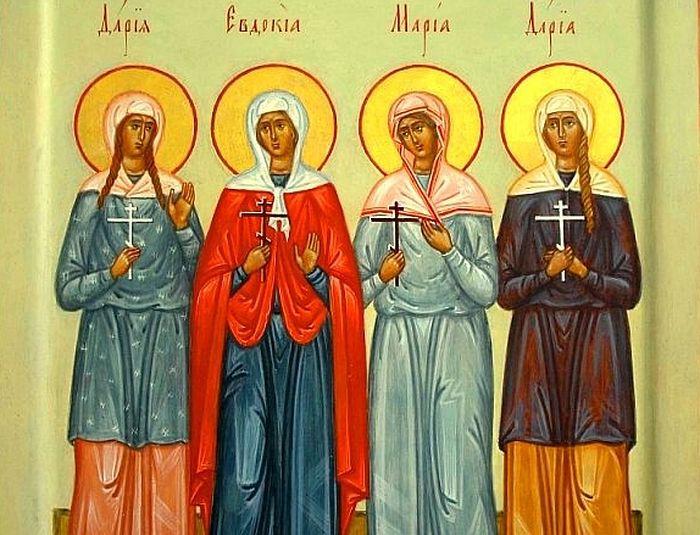 The Holy Martyrs of Puzo

St. Eudocia and her cell-attendants were arrested in August 1919. Godless individuals took turns beating Dunya nonstop for more than one whole day. The atheists did not let anybody in. When the beating stopped, the saint talked the soldier into calling a priest. Two hours before their martyrdom, St. Eudocia and her faithful disciples confessed and took Communion.

Despite the austerity of the spiritual labors of Martyr Eudocia, despite her seeming strictness and exactingness, people felt deep affection for her and even tried to shield her from beating as she was being carried to the site of her execution.

The Lord glorified His saints by numerous miracles both on the day of their martyrdom and afterwards.

They were executed by a firing squad on August 18, 1919, and interred in the same grave.

In August 2000 Sts. Eudocia, Daria, Daria and Maria of Puzo were canonized in the Synaxis of the New Martyrs and Confessors of the Russian Church at the Jubilee Bishops’ Council. After the glorification the holy martyrs’ relics were elevated, and today they are enshrined at the Holy Dormition’s Church of the Suvorovo village. Numerous pilgrims and representatives of the clergy flock there on their feast day every year. 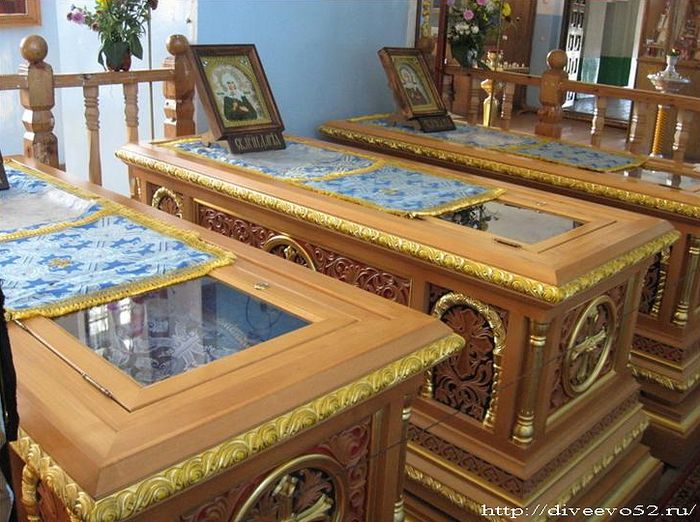 The holy relics of the Martyrs of Puzo rest in the shrines of the Dormition Church, Suvorovo

Troparion to the New Martyrs of Diveyevo, tone 5:

Today the Russian land rejoices in glorifying her New Martyrs that Diveyevo Convent brought forth, who in their faith, patience and meekness became like the first Christians, and now pray for the salvation of our souls.